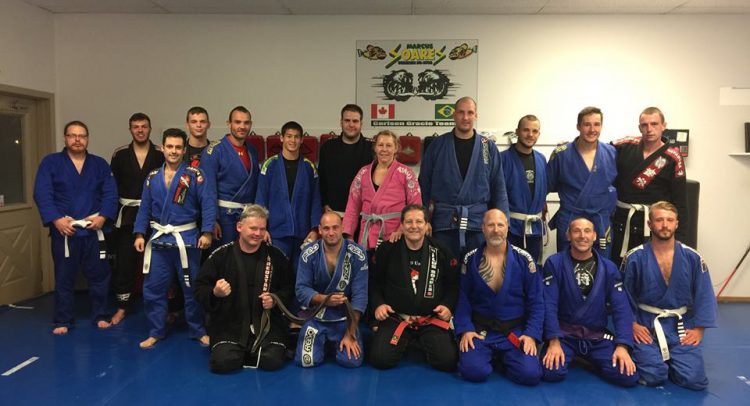 Body heat and grunts of exertion fill the small martial arts club that hosts The Rumble Academy, a Jiu-Jitsu club in Brantford, Ont. Punching bags and skipping ropes line the wall opposite the door, and a firm blue mat takes up the majority of the floor space. Spread across it, 17 men and one woman, all dressed in skin-tight nylon shirts and logo-emblazoned shorts, are separated into pairs and wrestling furiously. Amidst the minefield of entwined bodies, it’s impossible to distinguish the academy’s founder, Bryan Rumble, from the group. That is, until a bell sounds, and a balding, bearded man in his mid-50s disentangles himself from the grip of one of his students, declaring it time to switch partners. After a quick breather, Rumble and his new partner square up and go to work, vying to submit each other through a leg-lock or chokehold. Then, halfway through the match, Rumble murmurs something to his partner and walks off the mat gripping his arm. He’s dislocated his left elbow.

Fifty-four-year-old Rumble has been running the academy for 19 years, and despite his unassuming, fatherly build and calm demeanour, he’s a fierce martial artist who holds a black belt in two forms of the combat sport Jiu-Jitsu. Martial arts are only one part of his life, however. He’s also a published researcher who’s worked as a clinical epidemiologist with the American Society of Clinical Oncology since 2013.

His passion began as a child when he watched exhilarating feats of kung fu wizardry on television and became convinced what he was seeing was magic. Once this impression was made, it never left him, and his sense of wonder surrounding martial arts, as well as his propensity for teaching and his tenacious, analytical mindset propelled him on a lifelong path of coaching and learning.

Jiu-Jitsu was developed as the unarmed combat style of the samurai in sixteenth-century Japan. This earliest iteration spawned several styles, such as Japanese Jiu-Jitsu, which utilizes striking and throws, as well as Brazilian Jiu-Jitsu, which emphasizes sweeps, ground combat and submissions. Rumble holds a black belt in both styles.

Jiu-Jitsu was not his first love, however. “One of my earliest memories is going downstairs into the rec room on a Saturday morning and my dad was watching one of the original episodes of Kung Fu with David Carradine. I was blown away,” says Rumble. Unfortunately, growing up in rural southern Ontario, opportunities to learn martial arts were few and far between. It wasn’t until he bought his first car at 17 that Rumble was able to make his first foray into martial arts, signing himself up for karate lessons in downtown Brantford. He continued for three years until the club ownership changed hands and Rumble walked away, unsatisfied. He hadn’t pulled back the curtain on martial arts in the way he was hoping and resigned himself to the belief that the mind-melting techniques he’d witnessed in that Saturday morning combat drama were nothing more than television trickery.

Then, 10 years after walking away from karate, just before starting his undergraduate studies at the University of Waterloo, Rumble’s view of martial arts changed when he discovered Japanese Jiu-Jitsu. “In my first class I got my ass handed to me in a way that had never happened to me before,” says Rumble. “It was incredible to experience. I felt like I had touched the magic that had been missing from martial arts.” Now officially a Jiu-Jitsu convert, Rumble dove in headfirst. Training relentlessly, he managed to achieve the rank of black belt in Japanese Jiu-Jitsu, and the second rank in Brazilian Jiu-Jitsu, blue belt, all by the time he’d completed his four-year health sciences bachelor’s degree in 2001.

Upon graduating, Rumble took a research position at McMaster University in Hamilton, Ont., where he was also completing his master’s degree. While writing clinical practice guidelines for the school as a job and researching the need for ethical frameworks within these guidelines for his degree, he managed to keep up his regular Jiu-Jitsu practice (albeit in a new form). Rumble decided he was ready to find students of his own and begin coaching on campus. “I didn’t collect any fees, but I got mat space to use in the wrestling room,” says Rumble. His first experience as an instructor would end after almost three years.

The Jiu-Jitsu club was possible thanks to its student sponsor, who handled the paperwork and ensured the club was officially registered with the university. When that sponsor graduated and no one was prepared to take over the role, practice space became tough to find. Besides this, the school’s wrestling team (with which the Jiu-Jitsu club shared a mat) had begun a battle with combat sport’s greatest nemeses: ringworm. Looking for somewhere to lay the blame, the wrestling team pointed fingers at the Jiu-Jitsu club even though Rumble never had ringworm, nor had any of his students. These factors proved too much for McMaster’s official Jiu-Jitsu club, and left with nowhere to teach, Rumble began looking for martial arts clubs that would allow him to host classes. That’s when he discovered D&D United Martial Arts in Brantford. Despite this being a karate club, similar to the kind he’d first attended, he managed to strike up a teaching arrangement with the owner. The club would allow him to teach Jiu-Jitsu twice a week after regular classes ended. Nineteen years later, Rumble would sit on the sidelines of this same club nursing a dislocated elbow.

Rumble’s two passions, research and Jiu-Jitsu, are more complementary than they seem. To outsiders Jiu-Jitsu can look like a competition of brute strength, but those who practise the sport know that every round is a highly technical physical chess match. If a competitor fails to recognize and counter a technique their opponent is going for, they’ll find themselves being choked out before they can react. This technical aspect lends itself well to the analytical skillset Rumble developed through years of research in the field of clinical oncology. “He has this way of deconstructing Jiu-Jitsu. It’s almost like he can algorithmically figure out how you’re best going to learn a technique, then adapt that technique to your learning style,” says William Dungey, a student who’s trained with Rumble for five years.

Passion and an analytical mind alone don’t guarantee success at The Rumble Academy, however. One of the most crucial elements is tenacity. “This sport takes you mentally to a place that most people just aren’t comfortable going to,” says Neil Moore, who’s trained with Rumble for 15 years. Rumble knows this, so to weed out those that may not have the grit to stick it out, he makes every new student “run the gauntlet” in their first class. It consists of the student having to make it through back-to-back matches with every member of the class, Rumble included, with no breaks. It’s a gruelling task that results in many first-timers not returning. The idea is to ensure that time isn’t wasted on people who aren’t serious. “I don’t want them to train half-assed for three months and waste time that I could be using to train my students,” says Rumble. When it comes to toughness, Rumble doesn’t just expect it out of his students, he leads by example.

Back at the academy, Rumble sits on the sidelines applying an ice pack to his left elbow. He turns down an offer of a ride to the hospital and instead dishes out mid-match guidance to the students closest to him on how to lock in the submissions they’re trying for. In between offering advice, he grinningly recounts a story of getting his ribs cracked by a student some years earlier. After about 20 minutes of icing and stretching, Rumble crosses his right leg over his left, places the palm of his left hand against his inner right thigh, grabs his left arm slightly above the dislocated elbow, and pulls inward, popping the joint back into its socket, all the while remaining stone faced. After bending his arm a few times, he hops out of his seat and steps back onto the mat. “How many rounds do we have left?” he asks, “and who’s going to be my partner?”

Are there too many cannabis stores?