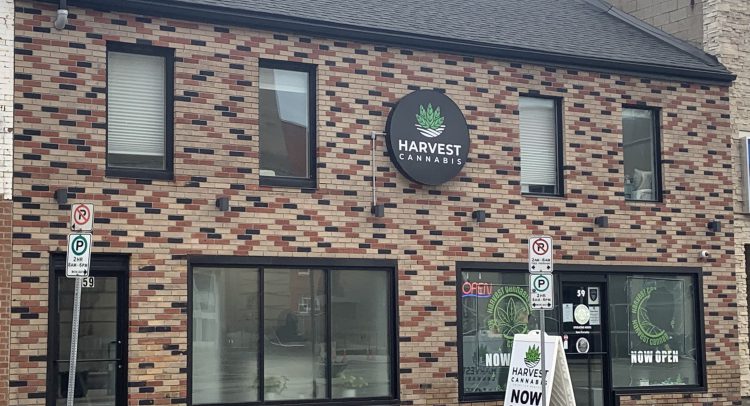 Are there too many cannabis stores?

CANNABIS STORES ARE SPROUTING LIKE WEEDS AND WILL LIKELY RESULT IN CLOSURES.

IT WAS ONLY A YEAR AND A HALF AGO THAT THE FIRST CANNABIS STORE OPENED UP IN BRANTFORD. FAST FORWARD TO TODAY, THE CANNABIS MARKET HAS EXPLODED WITH NEW STORES IN THE CITY AND SHOWS NO SIGNS OF SLOWING. DMJZONE REPORTER TEJAS SINGH HAS BEEN LOOKING AT THE ONTARIO CANNABIS RETAIL MARKET AND JOINS US NOW.

Russell Bennett: It’s no surprise, no. I think that there have been so many people keen to open up a store. If you recall back in 2016, before it was legalized, there were 100 stores at least, 130 stores at one point in Toronto alone. And they were all unlicensed because people’s desire to sell cannabis was so great. And people love cannabis for whatever reason, whether it’s medicinal, or whether it’s adult use, just to chill out on a Saturday evening or whatever. But whatever the reason, people are enamoured with this plant and enamoured with the production of it, the cultivation of it and the selling of it.

THAT WAS RUSSELL BENNETT, A CANNABIS LAWYER FROM TORONTO, TALKING ABOUT HOW IT IS NO SURPRISE THAT THE CANNABIS RETAIL INDUSTRY HAS GROWN SO MUCH OVER THE LAST 18 MONTHS.

IN BRANTFORD, THERE ARE 21 STORES LISTED BY THE ALCOHOL AND GAMING COMMISSION OF ONTARIO THAT ARE OPEN OR ARE WAITING FOR THEIR LICENCE TO BE APPROVED BY THEM. AND JUST BECAUSE EVERYONE LOVES THIS COMPARISON, THAT IS MORE THAN THE 18 TIM HORTONS IN THE CITY. ONTARIO REACHED A TOTAL OF MORE THAN A THOUSAND OPEN CANNABIS STORES IN AUGUST OF LAST YEAR. WHAT IS MORE, WHILE THE COMPETITION IN THE CANNABIS MARKET HAS INCREASED RAPIDLY, THEIR OWNERS DON’T SEEM TO BE INTIMIDATED.

MIKE DUNN IS THE CO-FOUNDER OF 1922, A CANNABIS STORE BASED OUT OF TORONTO, AND DUNN EXPLAINS THAT HE IS NOT WORRYING ABOUT WHO OPENS UP NEXT TO HIM. HE AND HIS TEAM ARE ONLY THINKING ABOUT THE QUALITY OF HIS PRODUCT AND WHAT TYPE OF CUSTOMERS THEY WANT TO CATER TO. THEY ARE TARGETING A VERY SPECIFIC CANNABIS CLIENTELE.

Mike Dunn: Like, I want a 50/50, male/female mix. I want two-thirds of probably the people walking in the door to be between the ages of probably 19 to 39. Anything else is kind of like a secondary target market. And if they come, they come but, like, it’s more just focusing on who you want your consumer to be? And is that the person walking in the door.

POST THE LEGALIZATION OF CANNABIS IN 2018 IN CANADA, A LOT OF NEW STORES OPENED UP, BANKING ON NEW CUSTOMERS THAT WOULD BE COMING INTO THE MARKET. IT HAS BEEN A FEW YEARS SINCE THEN, BUT THE NUMBER OF CANNABIS STORES ONLY KEEPS INCREASING. JAY ROSENTHAL IS THE CO-FOUNDER OF THE BUSINESS OF CANNABIS WEBSITE. IT HOSTS ALL THE LATEST STORIES ABOUT THE CANNABIS INDUSTRY. HE SAYS THAT THESE STORES DO NOT DEPEND ON NEW CUSTOMERS COMING INTO THE MARKET. LIKE ANY INDUSTRY, CANNABIS STORES ALSO FOLLOW THE 80-20 RULE, MEANING THAT 80 PER CENT OF THE PRODUCT IS BOUGHT BY 20 PER CENT OF THE CONSUMERS.

Jay Rosenthal: So, there’s the 80-20 rule. But we had a, we had an expert on from Leafly. It’s a website that sort of tracks all these things, and is a great publication, they said that they see even more refined than that–they see, I want to say, a 50-10 rule, that there’s 10 per cent of the consumers that buy 50 per cent of the product, like, they call them hype consumers were like, what they buy, how they buy, how they shared it, Instagram or social media is like part of their personality.

THE LATEST NUMBERS FROM THE GOVERNMENT OF CANADA WEBSITE SAY THAT 53 PER CENT OF USERS BOUGHT CANNABIS FROM LEGAL STORES IN 2021. THIS NUMBER WAS UP FROM 41 PER CENT IN 2020, AND EVEN THOUGH THERE IS SIGNIFICANT PROGRESS, PEOPLE ARE SAYING THAT THEY COULD BE DOING BETTER. RUSSELL BENNETT, THE CANNABIS LAWYER FROM EARLIER, SAYS THAT 53 PER CENT IS STILL VERY LOW. THE GOVERNMENT HAS HAD THREE YEARS, HOW MUCH LONGER DO THEY NEED IF THE GOVERNMENT’S ENTIRE REASONING BEHIND LEGALIZATION WAS TO COMBAT THE ILLICIT MARKET? HE BELIEVES THAT THIS IS BECAUSE THE LICENSING PROCESS FOR GROWING IS VERY DIFFICULT.

Russell Bennett: I think that growing weed has been very easy to do for a lot of people and very difficult to do for a lot of licensed people. So, what you have is a bunch of legacy growers that really love growing and are good at it and have supplied the unlicensed market for years and years and years, and they already have their loyal supply customers and their loyal customers. And those customers, when they go into a retail store, are extremely underwhelmed by the product.

THERE ARE A LOT OF CANNABIS STORES THAT ARE LOCATED WITHIN A FEW BLOCKS OF EACH OTHER IN BRANTFORD, AND RESIDENTS LIKE YAZMIN SAAVEDRA ARE PERPLEXED.

Yazmin Saavedra: There is no room for more because Brantford is such a small city, and I have been here for a long time. And I think there’s just too many stores. I have bought cannabis before and I can say that I just don’t get it.

SO, WHY AREN’T THESE STORES SPREADING OUT? WELL, THE ANSWER TO THAT IS THAT THERE WAS A GLITCH IN THE SYSTEM FOR A LONG TIME WHERE THESE STORES WERE NOT TOLD BY THE REGULATORS WHERE THE OTHER STORES WERE GOING TO POP UP.

THE NEXT QUESTION THAT COMES TO MIND AFTER SEEING THE CLUSTERING OF THESE STORES IS THAT SHOULD THE MUNICIPALITIES BE GIVEN MORE POWER TO BE ABLE TO RESTRICT WHERE THESE STORES CAN BE LOCATED? CONOR PURDON IS A PROFESSOR AT THE ACADEMY OF APPLIED PHARMACEUTICAL SCIENCES, WHICH IS A POST-SECONDARY COLLEGE IN TORONTO. HE BELIEVES THAT EVEN THOUGH SOME MUNICIPALITIES MIGHT LIKE TO HAVE MORE CONTROL, HE WOULD NOT WANT TO SEE THAT.

Conor Purdon: I think the rules right now, like, having more of an open system does allow for, you know, retailers to potentially, you know, really work harder at differentiating themselves and be more competitive with their peers. So, personally, I probably wouldn’t advocate for municipalities having more control. You know, I think it’s up to the retailer to, you know, determine a location that they feel is suitable and that they feel that they can be competitive in and that’s kind of their choice, their decision.

SO, WHAT IS THE NEXT STEP IN THE EVOLUTION PROCESS OF CANNABIS STORES? HERE IS WILL STEWART, A CANNABIS INDUSTRY EXPERT FROM HILL + KNOWLTON STRATEGIES TALKING ABOUT HOW THESE STORES COULD EVOLVE IN THE FUTURE.

Will Stewart: Yeah, I think we’re gonna see a big diversity of things. And it might be with stores, it might also be with restaurants to your point, I actually think infused food is the next frontier. Regrettably, honestly, it’s difficult in Ontario to have smoking inside because its Smoke-free Ontario Act. And that actually has nothing to do with cannabis. It’s just it’s a health measure, and I don’t see that changing. So, could we get to a place where we have higher-end infused foods, a lounge where you can sip cocktails, those types of things, I think are on the horizon for Ontario and other places around the world.

THE CANNABIS RETAIL MARKET HAS A BRIGHT FUTURE AHEAD. CANNABIS EXPERTS LIKE ROB TYRIE, WHO TEACHES CANNABIS INDUSTRY STUDIES AT SENECA COLLEGE, EXPECT THAT THE NUMBER OF STORES WILL GO DOWN IN SOME AREAS BECAUSE OF SATURATION BUT THERE IS STILL ROOM FOR MORE.

Rob Tyrie: There’s room for more of the right store, there’s room for more balance, you’re gonna see, I’m pretty much predicting that in 10 years, there won’t be a community that won’t have a legal construct in some way, shape or form. So, 10 years, the prices will go down, and then the prices will be like, alcohol, they’ll be made up. There’s lots of futures like that. But I think that this framework overall, it seems to be overall, generally the right thing to do.