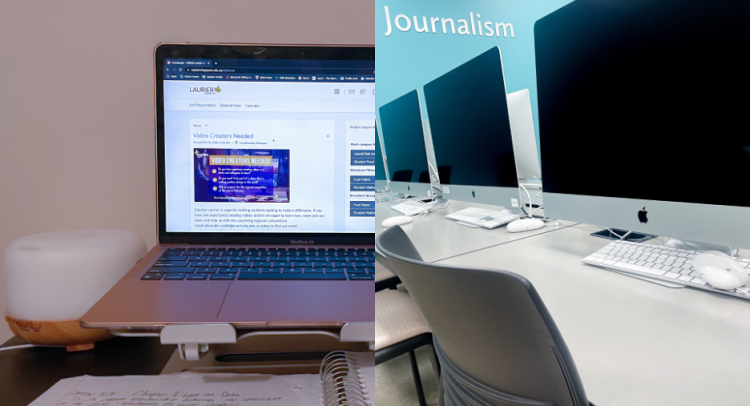 For some staff and students, returning to campus doesn’t feel like the right call.

After nearly two years of remote learning, Laurier students will return to classrooms and lecture halls by the end of February.

Wilfrid Laurier University decided at the end of 2021 that students would continue learning remotely for the month of January as Omicron drove up COVID-19 case numbers, forcing much of Ontario to shut down.

Staff and students have been waiting for the moment they could return to classrooms, but the announcement raised questions for some.

When Steve Wilcox, an associate professor in Laurier Brantford’s Game Design and Development program, learned of the school’s plan, he wrote an open letter to Laurier president Deborah MacLatchy sharing his concerns and asking for instructors to be able to decide for themselves how they will teach this term.

“Faculty are expected to implement whatever directions land in our inboxes, however reasonable or unreasonable they may be,” said Wilcox.

To address these concerns, Laurier held separate town halls for staff and faculty, and students, but for Wilcox, those town halls weren’t enough.

“[They] function more like press releases than they do meaningful consultations. The university disables chat, prevents attendees from seeing who is participating in the call and only responds to pre-written and pre-selected questions,” said Wilcox. “So, a public-facing letter seemed like the next logical step.”

On the Waterloo campus, third-year neuroscience student Annika Veroni, had the same idea. She started a petition calling for hybrid learning, signed by nearly 300 Laurier students.

Upon hearing the concerns of her classmates, a professor encouraged Veroni to speak up. “She had expressed that the administration at Laurier were not as apt to listen to staff and faculty as much as they are to students,” said Veroni.

Veroni first put her petition in a Google doc, but later uploaded it to Change.org to avoid trolls. Veroni then sent a letter to Laurier’s president and vice-president, restating her desire for a hybrid format.

“Unfortunately, nothing has really come from it so far,” said Veroni. “I received a response from the vice-president essentially saying, ‘Thank you for sharing, but nothing’s going to change.’ It was a little bit disheartening.”

One reason why people don’t want to be back on campus right now is because of the health risk.

Vanessa Oliver, a Youth and Children’s Studies associate professor, cares for an immunocompromised person. To keep them safe, Oliver and Laurier for accommodations, such as a hybrid format, but the university told her she’d have to return to in-person teaching by the end of February.

Oliver is concerned that both the university and the government’s response to the omicron variant doesn’t consider those at high risk. “It just didn’t seem to be a socially just or equitable policy as it comes to understanding disability and chronic illness,” she said.

“Return to campus planning included considerable discussion and consultation with academic leadership, the Wilfrid Laurier University Faculty Association, the Wilfrid Laurier University Students’ Union and Graduate Students’ Association. There was also consultation with local public health in Waterloo Region and Brant County, and with other universities in the sector through the Council of Ontario Universities,” wrote a Laurier spokesperson who declined to be identified in an email.

Laurier doesn’t require instructors to teach in a hybrid format. Despite this, Oliver and Wilcox both plan to accommodate students who can’t, or don’t want to, be in-person.

“I think many of us have just come to the conclusion that we have to offer some form of hybrid learning,” said Oliver. “There isn’t very much consistency across classes, and I’m sure that’s very frustrating for students but also for faculty who are hoping to give [students] the best experience possible.”

On Laurier’s Brantford campus, class sizes tend to be smaller than in Waterloo. Both of Oliver’s classes this term have about 30 students.

“Instructors with larger classes do not necessarily have this luxury,” said Wilcox. “It can be incredibly challenging to monitor and maintain two modes of delivery at the same time.”

Moving forward, Oliver said she would like to see Laurier consult more with its students before making decisions. “This administration was saying that the return to campus was largely because that’s what students wanted,” she said.

“What I was hearing from a lot of my students was that isn’t, in fact, what they wanted.”

For the love of fungi