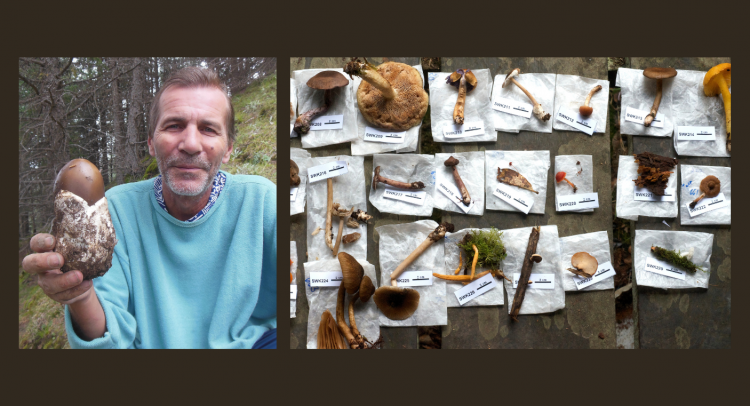 For the love of fungi

Waking in a hammock at six a.m. in Gunung Mulu National Park, Borneo, the first thing you see is mist and 131 feet of natural camouflage, with green and brown trees stretching into the sky. It’s a moist, muggy 26 degrees Celsius, the moisture sucking into your skin just like the muggy feeling in the atmosphere after a rainfall. You hear faint, distant sounds of creatures like frisky millipedes, snakes and lizards lurking and a constant buzzing in the air. You realize you are in uncharted territory, not surrounded by much human life other than the couple of people waking around you, and it completely changes your perspective of life back home in the busy streets of Toronto.

The adventure of soaking in new environments and interacting with the locals is what inspires Jean-Marc Moncalvo, senior curator of mycology in the department of natural history at the Royal Ontario Museum (ROM) and associate professor in the department of ecology and evolutionary biology at the University of Toronto. For Moncalvo, his work life and passion for mushrooms are intertwined as his whole life has been surrounded with the thrill of venturing to different parts of the world collecting, sampling, preserving and researching different species of fungi.

Moncalvo and his team travelled to the third largest island in the world in 2013 on an expedition to collect fungi samples. It’s roughly about 720,016 square kilometres, which is a little more than twice the size of Germany, and divided among Indonesia, Malaysia and Brunei. The daily routine in Borneo consists of waking up, eating breakfast, packing quick-to-eat lunches and heading out on a boat ride to the mountains, where the team hikes around and collects samples. As there are no human trails in the forest, the locals, who act as the team’s tour guides, use their machetes to cut pathways through the thick, wet, leafy rainforest. The tour guides warn you to be cautious of where you step and put your hands as the area is full of poisonous snakes and leeches thirsty for blood. This two-month expedition was successful as the team collected around 500 different species of fungi, 20 per cent of which were new discoveries.

Making those new discoveries is part of what keeps Moncalvo so interested in mushrooms. He grew up in the Swiss Alps on the shore of Lake Geneva. Growing up, he would go into the woods with his family every weekend to collect mushrooms and berries. His interest in fungi has grown since then, intensifying every time he learns about or discovers a new species. Only 10 per cent of the fungi on this planet have been discovered. Mycology, the study of fungi, is not a popular career path in the west, unlike in Africa, Asia and South America, but it is useful. A common example of medication many use today is penicillin, which comes from fungi. By preserving and documenting the DNA, specimens can be used for medicinal purposes now and in the future.

After completing his PhD at the University of Lausanne, in Switzerland, in 1991, Moncalvo did a post-doctorate in Taiwan. His work involved developing new strains of reishi mushrooms for commercial use. “It can only be found in the wild, and it is very expensive,” said Moncalvo of the mushroom that is important in Chinese pharmacopoeia. In order to study the mushroom’s diversity, he developed a laboratory for molecular biology and DNA sequencing. “At the time, it was the very early days of some molecular biology techniques like the polymerase chain reaction, PCR, and I had some expertise on this new technology that they did not have,” said Moncalvo. “They were happy to have me, and I was happy to be in Taiwan.”

Although most of his time was spent in the lab, Moncalvo took time to enjoy Taiwan’s natural wonders. “It’s amazing to be walking through the rainforest in southeast Asia — what is left, it’s been completely destroyed, which makes me makes me cry,” said Moncalvo.

For the next step in his career, he joined Duke University, in North Carolina, to work alongside top scientists and study mushroom evolution using DNA sequencing techniques. From there, he received research grants to continue his studies. Eventually, he ended up being a professor at the University of Toronto, taking care of its extensive fungal collection, which moved to the ROM in 1996.

Currently, his life revolves around research. With his combination of experience in the field, lab and classroom, Moncalvo was a natural fit for his current job at the museum, creating and hosting public programs and events, showcasing mushrooms and explaining them. The ROM has a collection of half a million species of fungi, making it one of the largest collections in North America.

Although his success is from his own curiosity and hard work, the thrill working with others makes his career and passion for mycology much more exciting. Simona Margaritescu, a mycology technician at the ROM and colleague of Moncalvo for 17 years, describes him as a curious soul who loves nature and fungi. She says he loves field work and never brags about his accomplishments. “He is the perfect combination of being a professor and researcher and a really good friend,” says Margaritescu.

Another colleague and family friend of Moncalvo, Hillary Clermont, who has done mycology work under Moncalvo at the ROM and has been in the field with him many times, has known him for 10 years. She says he is nurturing, honest and very encouraging. Clermont studied fine art painting and drawing with a minor in Indigenous visual culture and was often dismissed by others because she didn’t have a formal degree in science. However, Moncalvo opened opportunities for her because he recognized her ability to conduct field work. Clermont, being Indigenous, says there is under-representation of Indigenous people in science and she’s thankful for Moncalvo for his support. “It was so cool to have someone validate my knowledge and to encourage me to further my learning,” says Clermont.

Both Margaritescu and Clermont were on the expedition to Borneo. While there, the ROM hosted a Friday Night Live event for people in Toronto to stream at home or attend in person. It was a short, five-minute live video connection between the partygoers and the scientists currently. People interested dropped by the Earth Rangers Studio to participate while others continued their adventures elsewhere in the ROM. Although Moncalvo wasn’t on the live feed, the extensive work him and his team did in Borneo is still being examined today.

Professionally, Moncalvo is close to retirement, and with the pandemic and borders being closed, he lost lots of time doing field work abroad. Nonetheless, he remains optimistic and will continue to research mushrooms for his personal pleasure. Moncalvo loves the research and study around fungi, but his admiration with mycology and nature is why he finds it important to also discuss advocating for biodiversity. He says the planet is not doing well because we are not respecting the planet. We instead are destroying the planet. 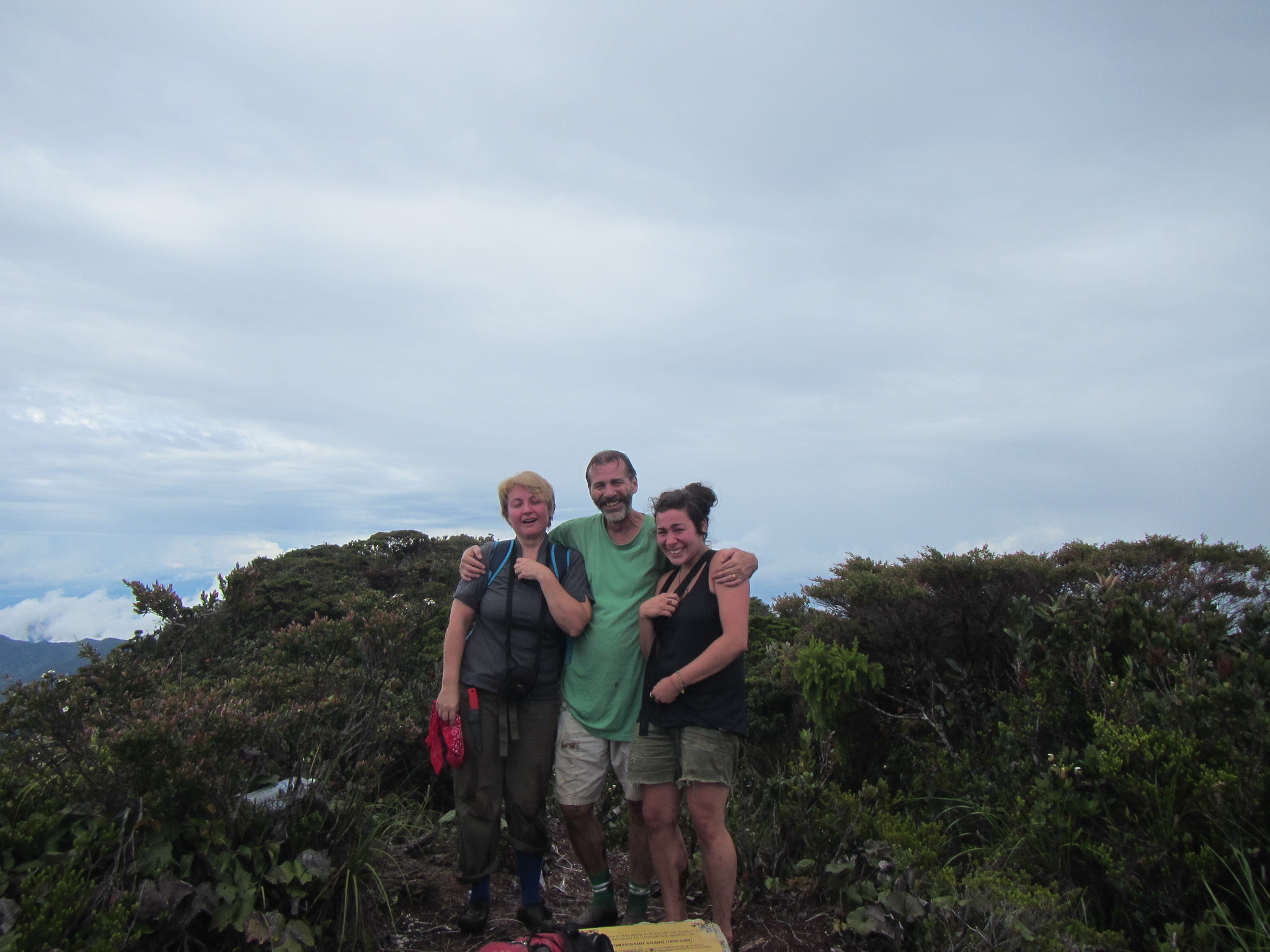 (left to right) Simona Margaritescu, Jean-Marc Moncalvo and Hillary Clermont getting emotional after reaching the top of Gunung Mulu in Borneo.

Creating to connect, support and inspire