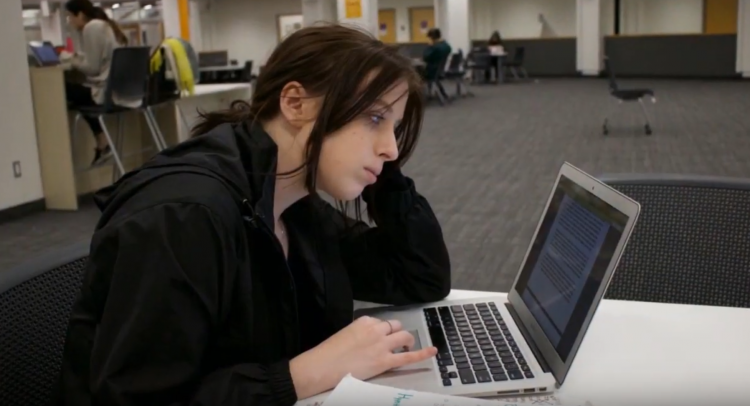 CHANGES TO THE STUDENT LOAN PROGRAM HAVE AFFECTED STUDENTS’ WELL-BEING AND THEIR ABILITY TO CONTINUE THEIR STUDIES.

Meghan Grandy is the first person in her family to attend university. As most first-generation students know, that comes with a lot of pressure to succeed. By all accounts, Grandy, 19, is doing just that. A second-year digital media and journalism student at Wilfrid Laurier University, in Brantford, Ont., she excels academically and juggles a part-time job with a range of extra-curricular activities, including being the lead photographer for The Carnegie,the campus yearbook, and participating in Laurier Art Hawks, a group in which she has won a couple of awards. She’s also president of her program’s students’ association. “Laurier is a place where I feel so included and a place where I know I have a voice,” she says. Grandy says she’s able to attend school because of the support she receives, as a combination of grants and loans, from the Ontario Student Assistance Program (OSAP).

So, when the Ontario government announced major changes to the program in early 2019, Grandy was worried. Not long after, her mother was diagnosed with cancer. This has played a huge role in their lives as her mother is unable to work due to the treatments she receives, leaving her daughter to deal with her finances on her own. It hurts her mother that she is unable to assist Grandy as much as she would like to. Under normal circumstances, Grandy and her family can’t afford to fund her studies on their own. If she is no longer eligible for the same amount of student aid she received up until a year ago, she isn’t sure if she can afford to complete her degree.

The Ford government’s changes to OSAP have had a serious effect on Grandy and thousands of students just like her across the province, who began their degrees with the support of grants and loans to help invest in their future. Without that support, many students may have to drop out, which is bad for them and society as a whole.

In January 2019, the Ford government announced a number of changes to OSAP in what was called an attempt to funnel support to students with high grades and the greatest need. In a statement, Merrilee Fullerton, minister of training, colleges and universities, said “the previous government believed in handing out OSAP money to some of Ontario’s highest income earners with virtually no meaningful criteria for success.” Among the changes, the eligibility threshold was lowered so that only students from families with household incomes of less than $50,000 were eligible for loans. The number of grants, which did not have to be repaid, were decreased and restricted.

This was a significant change from how OSAP used to operate and, under the previous Wynne government, had been expanded to enable more lower-income students to attend college and university. “We’ve seen some very great things happen with the old framework. We’ve seen increased enrollment from students from marginalized communities, and to see that taken away is really disheartening,” says Shawn Cruz, vice-president of university affairs for the Wilfrid Laurier University Students’ Union.

Changing how OSAP is offered midway through a student’s degree creates a lot of uncertainty and pressure for them. “The most fearful thing that students believe about debt is their ability to pay it off,” says Cruz. Doug Hoyes, an insolvency trustee and co-founder of Hoyes, Michalos & Associates, Inc., in Kitchener, Ont., agrees. “It is the fear of the unknown that is the biggest thing,” he says. “What we see with a lot of students when they graduate is there are no full-time jobs that are there, so they end up doing the gig economy.”

For now, Grandy is trying to remain positive. She works as a personal shopper for PC Express, picking and packaging groceries people order online. Her income isn’t enough to cover her school costs, but at least it funds the $20 to $30 she needs every week for groceries and transportation to visit her mother at home. Not knowing how she’ll afford her studies in the future is stressful, to say nothing of the OSAP debt she’s accumulating. According to the debt calculator provided on the OSAP website, Grandy expects to pay about $300 every month in order to clear her debt within the prescribed nine years. It’s stressful, but she’s determined to make it work. It’s important to Grandy to finish her degree, to make herself and her mother proud and to be a positive role model for her younger brothers. “The big picture is keeping me here,” she says.

The reality of living with student debt

Millennials in the workplace: Mistreated and misunderstood