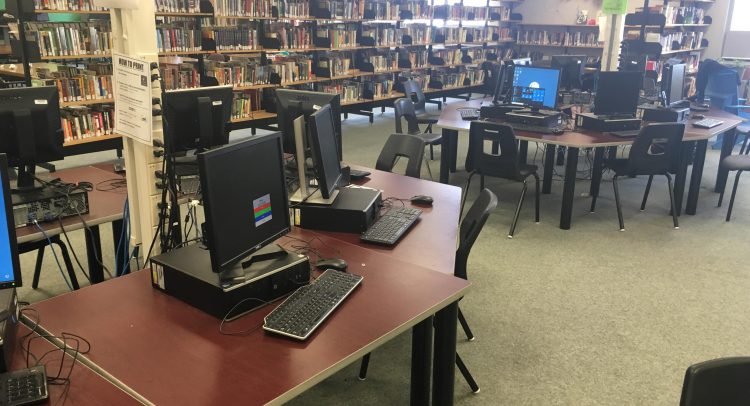 The cost of technology on campus

AS CLASSES RELY MORE AND MORE ON DIGITAL TECHNOLOGY, SCHOOLS ARE LEAVING STUDENTS WHO CAN’T AFFORD IT BEHIND.

Sitting at the kitchen table in his small but comfortable townhouse, Rodolfo Carballo taps the final words into a paper he’s writing for his human rights class. While there is nothing remarkable about this scene for many students, Carballo, who is completing a bachelor’s degree in international development at the University of Guelph, doesn’t take it for granted. Not long ago, he didn’t have the luxury of doing assignments from the comfort of his own home. He couldn’t afford it. The high costs of rent, food, tuition and other school fees meant he had no money to spare for a laptop. Instead, he’d take the bus to campus to use the library’s computers. “It’s very time consuming to have to go back and forth,” he says. “The library isn’t open 24-7, so I had to take advantage of the time that I had.” Unlike students who could regularly pull all-nighters to get their assignments in on time, Carballo would have to drag himself out of bed in the early mornings to arrive at the library when its doors opened.

Carballo’s family had always struggled to pay for the technological trappings of modern childhood. But the transition from high school to university was especially difficult because, on top of all the other costs, technology such as laptops and software is becoming fully integrated into the curriculum of many university programs. What’s more, computers are now also a core part of elementary school where curriculum is increasingly designed around the idea that every student has access to a desktop computer or laptop. According to a MediaSmarts survey of more than 4,000 Canadian teachers, 97 per cent of teachers say their classrooms have at least one type of networked device. While supporters like to point to how computers help kids learn, they pay less attention to the issue of access. Not only are kids whose families can’t afford personal computers and other technologies left out socially, but they are also getting left behind academically.

“If you don’t have technology nowadays, you are the minority, and as we all know, it’s difficult for any minority to function in society,” says Ingrid Venturini, a criminology student at Wilfrid Laurier University in Brantford, Ont. “It restricts your social communication but it also, in a way, restricts your access to opportunities and things involved with school.” Laurier’s Brantford campus has a small digital library, called the Learning Commons, which has some computers available for its 3,000 students. But beyond that, students must access computers at the Brantford Public Library. Laurier student Erin Damm remembers panicking when her laptop broke. “I was only without my laptop for two weeks, but I can’t stress how difficult school was without it,” she says. “I had online discussion posts and essays to write, and I struggled with my class schedule to find time to get to the Brantford library.” Damm, who is majoring in youth and children’s studies, stresses that it is hard for students to find the time to access computers when the library hours don’t mesh with their schedules.

Jilysa Haye is a social work student at Laurier Brantford and currently has a placement as an intern at Lansdowne Children Centre, a local organization that serves children with physical, developmental or communication needs. Even eight year olds, she says, are often required to use personal devices in the classroom, something she believes can have negative social and academic effects on those who can’t afford them. “They may be singled out by the teacher to go to a computer lab because they do not have their own device,” she says. And even when schools provide everyone with the technology, kids who don’t have access to computers or certain costly software at home don’t get the same chance as others to practise or complete their work.

Canadian schools have embraced technology largely because they see it as a way to help students learn. Seventy-nine per cent of teachers surveyed by MediaSmarts agree that networked devices make it easier for students to learn, and 74 per cent say those devices help them develop teaching styles that line up with students’ needs. Judy Heffer, a behaviour itinerant and social worker with Ontario’s York Region District School Board, says technology allows for “a creative way for students to express themselves.” It helps students “get their ideas down” with greater confidence. Heffer also stresses the benefit of technology in assisting students who have disabilities. “If they have a slight learning disability in written expression, it’s actually beneficial for them to have their own equipment,” she says.

The younger children are when they learn digital skills, the faster they will be able to incorporate them into their social and educational lives. And they will need to incorporate them. It is rare for anyone to get through university or college without some sort of technology-based learning. And good luck finding a job that doesn’t expect you to have some digital skills in your toolkit.

So, what kind of solutions are being offered to people who can’t afford to keep up with this transformation of education? Some schools are closing the technology gap by increasing their classroom resources. Erin Marie, a high school student at the Wexford Collegiate School for the Arts, in Toronto, says her school has made that investment (we have changed her last name to protect her privacy). “We have what we call ‘iPad carts,’ where we can sign an iPad out and bring it back to the classroom to participate in online activities, research and workshops.” This allows students to download content easily and engage with the class through online programs, which is important because most of the teaching involves a SmartBoard and PowerPoint. “Chalkboards are rarely used,” she says. Her teachers also tend to use classroom websites to share updates, assignment instructions and due dates—all of which is great for those who have easy access to a personal computer. But what about the students who don’t? Heffer points to one solution: some schools sign out laptops like they do musical instruments. “With a small deposit down, students would be able to take responsibility and have access to computers that they could take home as well as use at school.” Maybe. But in the meantime, students who are struggling to afford these tools are paying a steep academic and social price.