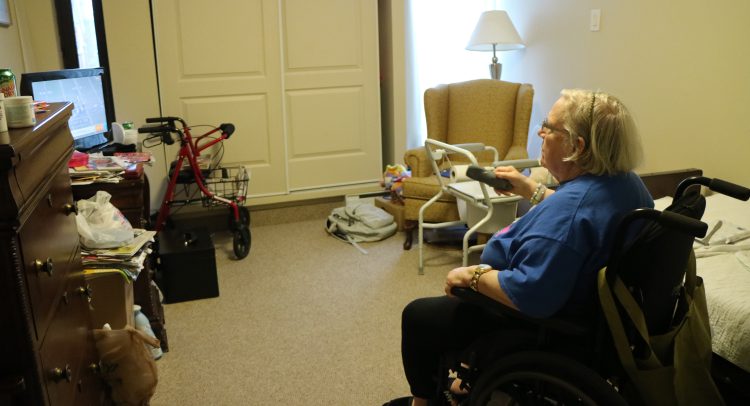 UN INITIATIVE TO HELP SENIORS BE PART OF THEIR CITIES IS TAKING ROOT IN CANADA.

Alexis Thoman still marvels at how a single moment affected her ability to walk. “I tripped, believe it or not,” says Thoman, recalling the day she fell on her way to the washroom of her bungalow in Paris, Ont. “I hadn’t been paying attention, and I tripped.” Thoman landed on the floor, her ankles crossed awkwardly under her, unable to move. “I couldn’t do anything. They just hurt like a hell,” she says. Thoman stayed like that, on the floor for three days, crying and cursing her bad luck. Finally, help arrived. Her cleaning lady had let herself in, and Thoman called for an ambulance. When paramedics arrived, she could not stand. “I didn’t walk for three days,” she says. “I guess maybe the blood was cut off.”

Thoman was healthy and active, and determined to live independently. But one fall changed all that. The ambulance took her to Brantford General Hospital where, working with staff at the walking clinic, she began her recovery. She expected to walk again and hoped to return home. Instead, when the hospital suddenly needed her bed and she was not yet able to walk independently, Community Care Access Centre staff at the hospital sent her to Charlotte Villa, a seniors’ home in Brantford, Ont. Once there, Thoman was put in a wheelchair and stopped going to physiotherapy. Today, a year and a half later, she is still living at Charlotte Villa, her Paris home traded for a studio apartment.

“Losing the chance to walk changes my whole life,” says Thoman. For one thing, although she enjoys participating in Charlotte Villa programs, Thoman feels more isolated than she did before. She can’t easily explore the city and take advantage of its community services. “I don’t know Brantford,” she says. “All I know that is Brantford is here.” Thoman’s feeling of isolation is not uncommon for seniors, which is why some cities are planning for “age-friendly communities,” designing communities that assist seniors in living longer and healthier lives by providing them with easy access to municipal services and facilities. If Brantford were an age-friendly community, seniors like Thoman would not need to rely on the retirement home alone, or friends, family or neighbours to help them get around, interact with others and take care of their daily needs.

The idea of age-friendly communities grows out of a 2006 World Health Organization initiative to meet the needs of aging populations. It identifies eight “domains of community life” that matter for seniors: outdoor spaces and buildings; transportation; housing, respect and social inclusion; social participation; civic participation and employment; communication and information and community support and health services. It encourages cities to provide services and facilities that accommodate the needs of older people across these domains. An age-friendly city would, for example, have well-lit sidewalks, solicit regular input from seniors about how their needs can best be met, create opportunities for older people to volunteer, visit museums, take courses and so on.

There are 2.2 million seniors living in Ontario, and that number is expected to double in the next 25 years. Public health officials in Canada have been promoting age-friendly communities since 2007, but progress has been slow. Brantford’s age-friendly planning process began with adopting the Master Aging Plan in 2008. Seven years later, city council endorsed the Age-Friendly Community Planning Strategy, aiming to improve seniors’ access to health and wellness services.

So far, Brantford has achieved several age-friendly milestones, including free library programs, affordable housing units and more than 50 city-run activities that are specifically for older adults. But there are obstacles to making the city fully age-friendly. One significant obstacle is a lack of communication between senior residents and the community resources that already exist. Brantford, for example, offers a variety of programs for seniors. But according to the Community Impact Report from the Grand River Council on Aging, many residents don’t know about them or don’t know how to find information about them. And so, they don’t participate. GRCA president Lucy Marco says the council is taking steps to improve the flow of information. “We’re encouraging organizations to do whatever they can do to reach out to seniors to get them back into whatever in the community.”

Many retirement home residents say they only participate in events and activities inside their homes. Venturing beyond the front doors raises too many challenges. Donald, 69, lives in Sheridan Lodge Retirement Home in downtown Brantford (we’ve changed his name to protect his privacy). He says he’s reluctant to leave the building because he worries about people’s responses to his health issues. “I have MS,” he says, referring to multiple sclerosis, a progressively debilitating nerve tissue disease within the brain. “As soon as people hear it, they step back and look at you like you’re another item.”

Leveraging city resources to promote seniors’ inclusion makes sense given the limited resources of many retirement facilities. “In the retirement home, the focus isn’t so much on their recreation, it’s more on their health,” says Alexandra Tupper, the former activities co-ordinator at Park View Retirement Home in Brantford. While routine health care is provided onsite, much of it is contracted out to the Victorian Order of Nurses. Park View has just a single PSW (personal support worker) and a single nurse on staff for roughly 43 residents during the day. “It’s hard to reach everybody,” says Tupper, who wishes she could have “quality time” with the residents. Even getting a clear picture of their needs is challenging, she says.

Meanwhile, many seniors in retirement homes do enjoy active lives. Charlotte Villa resident Irma says she enjoys taking part in the “lunch club” with other residents and going to birthday parties where the staff serves cakes and coffee (we’ve changed her name to protect her privacy).

In some cases, families see the care seniors receive in retirement homes as a substitution for their own care and neglect to check in on their elderly relatives. “When people hear the words ‘elder abuse,’ they immediately think it’s going to be physical,” says Marco. “It can be emotional, psychological or all different ways.” That’s not the case for Cynthia, who has lived at Sheridan Lodge for nine years (we’ve changed her name to protect her privacy). She stays connected with her kids in Nova Scotia by phone every three weeks. But it can still be difficult. “When I’m talking to them, I tried to explain things to them, but then I start to cry because I miss them,” she says. “I don’t know how to say to them, just say that I love you, and stuff like that.” Meanwhile, Donald’s kids are able to visit him, and they “have a chat” together. As for Thoman, she plans to move closer to her only remaining relative. Her nephew helped her find a retirement home in Streetsville, Ont., where he lives. With family nearby, perhaps she will be able to venture out of the retirement home into her new city. 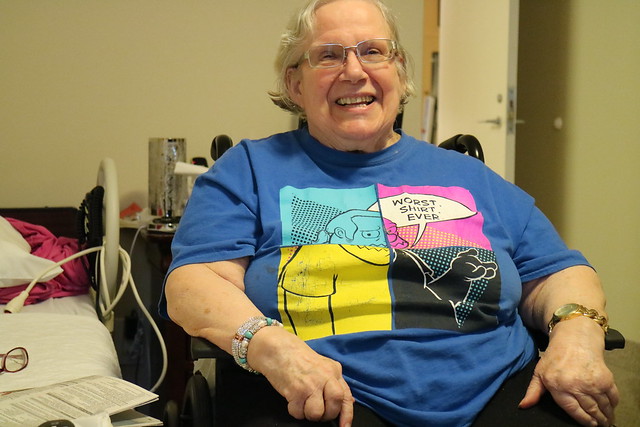 Alexis Thoman smiles at the camera. 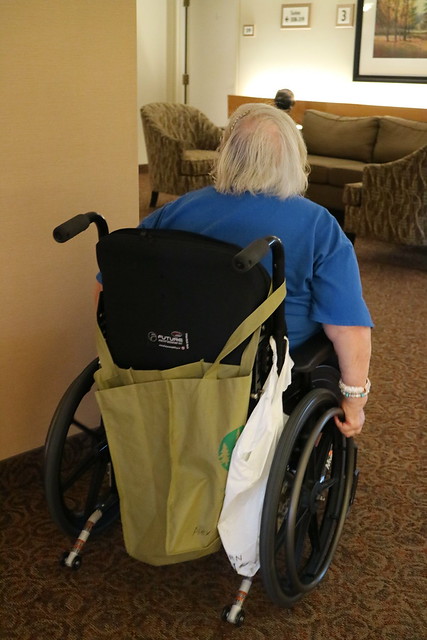 Alexis Thoman wheels her chair toward the elevator. 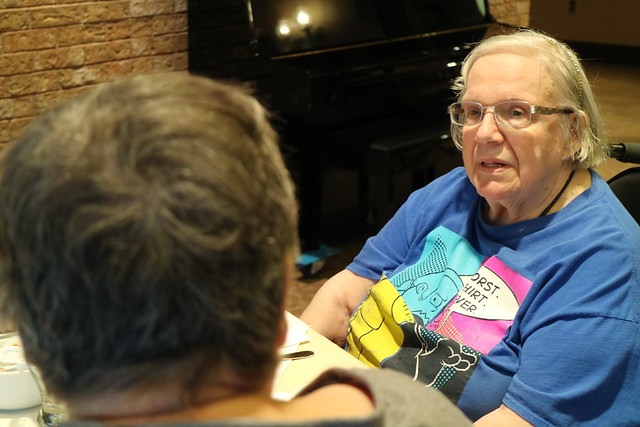 Alexis Thoman chats with a friend in the dining hall. 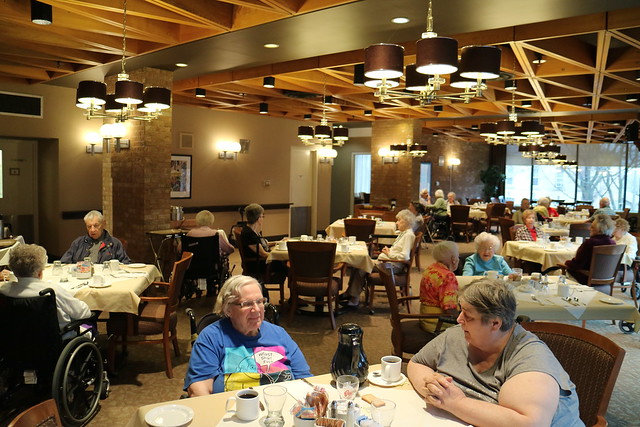 Alexis Thoman and other residents wait to be served lunch. 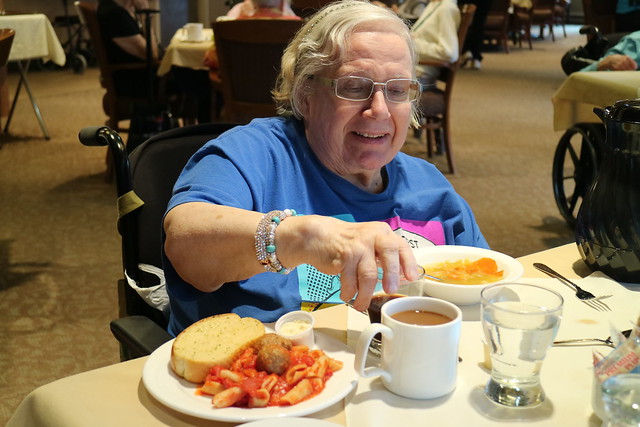 Alexis Thoman has lunch in the dining hall.

Why gay youth tend to self-isolate

The cost of technology on campus