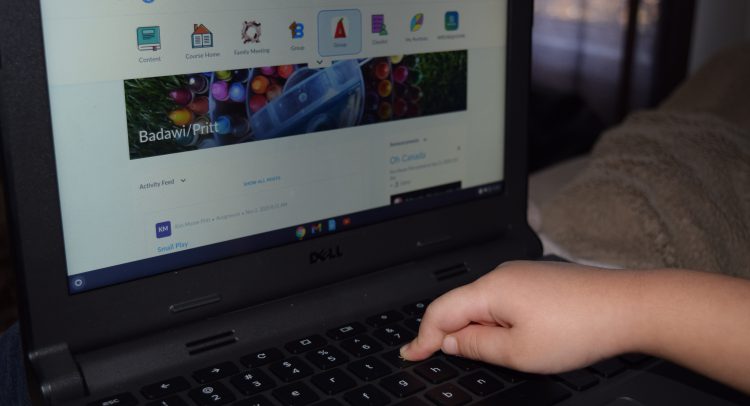 The challenges of distance education

REMOTE LEARNING POSES CHALLENGES FOR STUDENTS AND THEIR FAMILIES.

A second wave of COVID-19 means being in school is anything but ordinary for children, parents and educators.

The  second wave of COVID-19,  looks more dangerous than the first wave in March. On Nov. 8, Canada added 4,060 new cases of the novel coronavirus. The first surge prompted, among other things, the early closure of schools.

The Ontario government assigned $1.3 billion to ensure schools could reopen safely in the fall.  The Waterloo Region District School Board is one of the biggest districts in the province, with 121 schools and about 63,000 students.

Irfan Khan, a father of four in Cambridge, initially sent three of his children to school in September. He was concerned about the pandemic but thought of it as the new normal.

“As a father, I have to think about the future of my children. The school is the best place where they can learn,” said Khan. “In Canada, you trust that the government would never reopen schools if they thought there was a danger to the lives of the children. You can’t stop your life due to a virus. It might be here for a long time, so it is best to just accept it and move forward.”

However, many schools in Waterloo Region have reported COVID-19 cases. In October alone, there were at least 14 confirmed case of COVID-19 in at least 10 different schools. As of Nov. 9, the WRDSB reported an additional 11 cases in nine different schools. This has led to parents being more concerned about the safety of their children and themselves.

Khan was forced to rethink his decision and has now switched his children to distance learning from home. He is not the only one. According to the WRSDB website, about 8,500 elementary students had opted for distance learning.

“It was a hard decision, but you have to look after the welfare of the children. You want them to learn and grow, but you also want to make sure that everyone is safe,” Khan said.

Khan had another strong reason for switching to distance learning for his children.

“Mine is a single-earning household. If a child gets the virus and brings it home, and I get sick, my entire family will be at risk of great financial loss.”

“I have to commute to work each day. I am self-employed, and COVID-19 has already impacted my earnings. I have a lot of stress. If I also have to think about my children getting sick, then that is too much,” Ghani said.

He admitted this was hard for children and the teachers.

“Being in front of the screen is not natural. For a young child, moving around, jumping and playing is natural. I feel children are at a great loss. I feel for the teachers. They have to change their teaching styles and also learn new things.”

A study conducted by Western University found that some children were spending up to 13 hours per day in front of their screens. According to the Canadian Paediatric Society, children between the ages of two and five should not be getting more than one hour of recreational screen time.

In addition to children’s health, many parents have voiced other frustrations with distance learning. Stay-at-home mom Faiza Amir said it’s added to her daily responsibilities.

“My son just started school this year. It is very hard to keep a four year old sitting in front of the screen. I have to wake up very early in the morning to do a lot of housework so I can be there [with him] all the time.”

Amir is not alone in her concerns. COVID-19 and the response to the virus have forced an alternative learning experience on parents and educators.

“You have to schedule your day around the routines of the classroom. Even a task as simple as grocery shopping has to be put into a schedule. You feel like you have no control over the day,” Amir said.

Cindy Watson, a trustee with the WRDSB, who has been talking to parents about their challenges.

“I have heard from parents that they would rather have their kids in class. It is not the ideal, but it is a solution in the present times because of COVID-19,” she said.

“Ultimately, the decision lies with the parents. They can decide whether to bring their children to school or keep them home. We have both [options],” said Watson.

Watson said schools are following the guidelines set by the Ontario Ministry of Health and Long-Term Care and were doing all they could under the circumstances to make sure the environment is safe for children.

“The teachers are working hard …. It is a process that we are walking through, but it is the first time, and we are all learning.”

In-person education during the pandemic

Student living during a pandemic