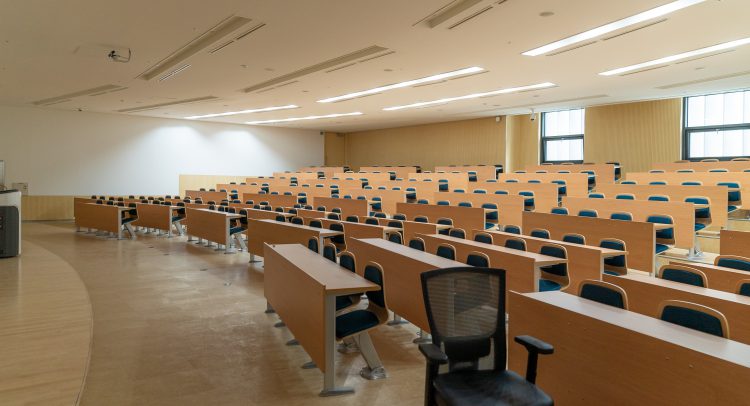 In-person education during the pandemic

A LOOK AT WHAT IN-PERSON POST-SECONDARY CLASSES LOOK LIKE DURING COVID-19.

Alexis Angliss is doing something few other Canadian college and university students are doing this year — attending class in person.

Once a week, Angliss, a first-year business administrative office executive student at Georgian College, in Barrie, Ont., has an in-person typing course.

Upon her arrival at campus, she uses the college’s safety app to answer several questions, including if she’s left the country recently or has any COVID-19-related symptoms.

Angliss says this takes her about five minutes to complete in her car before class. After getting a green check mark to indicate that she’s allowed to be on campus, she may enter the building where her class takes place no more than 15 minutes before it begins.

She is greeted at the door by a security guard who checks her status on the app. “We always have to wear a mask,” says Angliss. “You can’t take it off, and you can’t just chill around the building.”

Although there are many steps and restrictions, many students don’t have this opportunity. According to Statistics Canada, 92 per cent of post-secondary students had some or all of their courses moved online in April.

Like Angliss, Halliday says his student card grants access to school buildings only during his designated class times. He also has to use the school’s safety app to be able to enter.

Masks can be taken off to play instruments, and students sit behind Plexiglas barriers, maintaining a distance of two metres. “It’s so weird. It’s harder to hear people and see people, it just makes it harder to do things in terms of music,” says Halliday, who plays the oboe.

Meeting times have been significantly reduced and more breaks are required to sanitize the rooms and equipment, according to Halliday.

Arlene Khachadoorian, a first-year veterinary student at the University of Guelph, says all of her in-person labs are now hands-free.

“These things are easier to learn hands-on, especially when it comes to anatomy courses,” she says. “Our learning has been hindered there.”

Even with restrictions, many students feel grateful to have in-person instruction and a chance for social connection.

“Even though [classes] are altered, they still help reinforce the content we are learning. Also, in general, getting out of the house and having some change in scenery helps with learning,” says Khachadoorian.

She also says having some form of in-person instruction helps students focus and engage with each other.

“When I’m in person, I feel the need to pay closer attention and be put together and completely present, whereas with Zoom, I’m usually on my bed, and I feel very disconnected,” says Khachadoorian.

Steve MacNeil, associate professor and chair of chemistry and biochemistry at Wilfrid Laurier University, in Waterloo, Ont., says they really wanted to offer students in-person labs. The university said that if a component of a course could not be done online, programs had to submit proposals for approval.

Laurier science students were polled about their level of interest for in-person labs, and MacNeil says there was a lot more interest than expected.

“What I hear anecdotally from students is that they’re really pleased that they’re able to come in and do the lab,” says MacNeil. “My lab co-ordinators told me students have said they’re just so happy to be out of the house.”

With the help of lab co-ordinators, faculty came up with a four-week intensive lab experience, combined with eight weeks of online learning for science students.

“The important thing, and what I’m hearing about from lots of different sources, is the thing that students are missing the most this year is contact,” says MacNeil. “That sense of community.”

MacNeil says if a student in a lab tested positive for COVID-19, that lab section would likely have to be shut down for the term.

Olivia Falcone, a fourth-year accounting student at St. Francis Xavier University, in Antigonish, NS, says being in the “Atlantic bubble” feels much safer than being in Ontario, where she lives when not in school.

“There’s really no cases here, so it feels pretty much the same as usual, just with masks,” she says.

Most students could choose whether they wanted to attend courses that were offered in-person.

Falcone says her classes were offered either only in-person or only online, but some of her roommates were able to choose.

The challenges of distance education