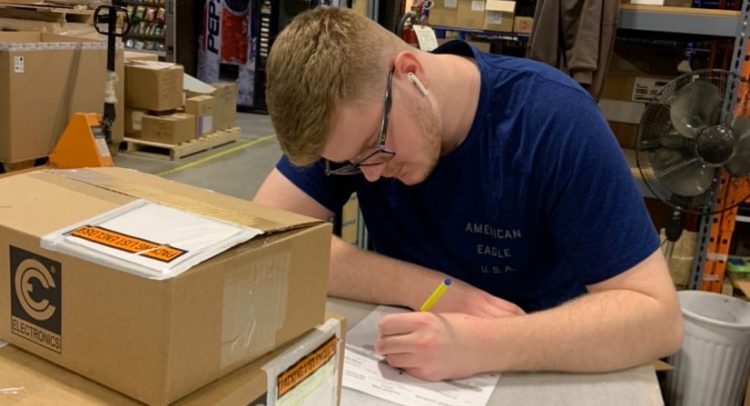 At a time when the youth unemployment rate in Ontario is soaring, most young people hope to find a job in their field after graduating from college or university.

After all the hours they’ve spent in class and studying, not to mention the money they’ve spent on tuition and living expenses, that’s natural.

Kurtis Rutledge is not most people. After graduating from Conestoga College, in Kitchener, Ont., in 2019, he wasn’t in a rush to land a job in animation, the focus of his studies for the previous two years. He was content to work full-time at a packaging warehouse for minimum wage, a job that requires only a high school diploma, and live with his parents in nearby Cambridge.

“A lot of people feel trapped, that they have to do this and that…that it’s the end of the world” if they don’t land their dream job after graduation. “But it’s not,” he says. “I’m still only 21 years old with my whole life ahead of me.”

Rutledge’s point of view is unusual compared with many of his peers, but his optimism about eventually finding work as an animator may not be misplaced. Thanks to the skills he acquired at college, he’s well-positioned to find work, unlike many new graduates whose education and training does not match current labour market demand.

That has led many students to consider college diplomas over university degrees more than they used to, as employers emphasize their need for skills and hands-on experience.

In 2019, the unemployment rate for people 15 to 24 in Ontario was 12.4 per cent, the highest rate of any age bracket in the province. It was also higher than the national rate of  10.3 per cent, according to Statistics Canada.

Unemployment rates in Ontario in 2019 (Data from Statistics Canada)

“Youth unemployment has stayed stubbornly high since the 2008 recession,” says Charlene Hofbauer, executive director of the Workforce Planning Board of Waterloo Wellington Dufferin in Ayr, Ont..

She says there’s a disconnect between the careers young people want (e.g., psychologist) and the jobs for which there is demand (e.g., plumbers, electricians and other jobs in the skilled trades).

Hofbauer says her organization tries to make students aware that earning a university degree doesn’t necessarily put them on the fast track for a job, as college graduates usually find work faster due to the hands-on, skills-based learning they receive.

She also adds that it can take university graduates six years to find a full-time job, while college graduates usually find one within two to three years. That can be tough to sell to students, though.

“There’s always been a stigma on college for not being ‘as good’ as universities,” says Danette Dalton, executive director of the Workforce Planning Board of Grand Erie in Brantford, Ont.

“But that is not necessarily the case, as salary-based comparisons of both college and university can be quite equal or even higher for the college graduate.”

In her area, for example, the unemployment rate for people with college degrees is 4.8 per cent compared to 4.4 for university graduates, which is only a slight difference.

Another reason why it often takes longer for university graduates to find work is how they market themselves and the skills they’ve learned.

This is especially true of graduates from liberal arts programs, such as English and history, who often have difficulty translating what they’ve learned at school into skills that are useful in a workplace, skills like critical thinking, research and communication.

In other cases, an undergraduate degree is just the first step required for the eventual dream job. For example, if you want to become a psychologist, you need at least one more degree before you’re able to practise.

Wynona Mendes, labour market analyst with the Workforce Planning Board of Grand Erie, says it sometimes just takes time for young people to settle in to the job market and find the right position, which usually happens around 27.

“People tend to get serious about their life around that time,” she says. “The average age of a tradesperson in Ontario is 27, and we are still unsure why that is the case.”

As more employers want new graduates to have skills, universities are expanding the training they give students through practica, community service learning opportunities and experiential learning. The stigma about learning and needing skills is much less prevalent than it was a generation ago.

Shameel Abdullah understands that. He graduated with a computer science degree from the University of Waterloo in 2018 and found a job quickly, but he says if he had to do it again, he might make a different choice about his education.

“If I were to go back, I would definitely think about college,” he says. “The thing about computer science is that you don’t really need a university degree. You just need to know computer science, which you can learn from college.”

While he says his four years of study were worthwhile, he credits his practical experience, gained from working on a fitness app with his brother, for getting him his current job as a software developer at ApplyBoard in Kitchener, Ont.

He says he wishes his program had fewer lectures and more opportunities for hands-on learning. Abdullah says he had to take the initiative to find summer jobs to hone his skills.

Today, Abdullah notes his company hires fewer computer science majors and more people who took the initiative to learn how to code through bootcamps and workshops, regardless of their academic credentials.

Even though college is becoming an increasingly popular choice for students, university is still the best path for long-term advantage according to Jennifer Hicks, a career consultant at Wilfrid Laurier University’s Career Centre. “Laurier has a 97.7 per cent placement rate after one year of graduation in 2017,” she says. “That includes roughly 70 per cent of graduates who found jobs, 28.7 per cent who are in further education and only approximately two to three per cent who are unemployed.”

She adds that college is a solid option for people who want to get jobs in the trades but says university is still the primary path to a competitive salary over the long-term for professionals such as doctors, lawyers, teachers and engineers.

She says that while college graduates may find jobs more quickly than their university counterparts, the salaries for those positions tend to stagnate more quickly.

That may be true, but for now, it isn’t a worry for Rutledge, who’s happy to live at home while working in a warehouse before looking for animation jobs. His father, Craig, thinks he should try harder to find a job in his field.

“I was a little disappointed he couldn’t find something or even contacts in the industry,” he says. “You worry he might forget what he learned, you’re not staying sharp.” Rutledge says he will try to apply for jobs in animation in the future but will continue to be optimistic.

“I do need to try harder in finding work in my field, and I have been looking at employer websites and trying to network in my spare time,” he says. “I don’t want to get too comfortable working at a basic warehouse job, but I know I have time to find a job I actually want.”

The connection between diet and mental health