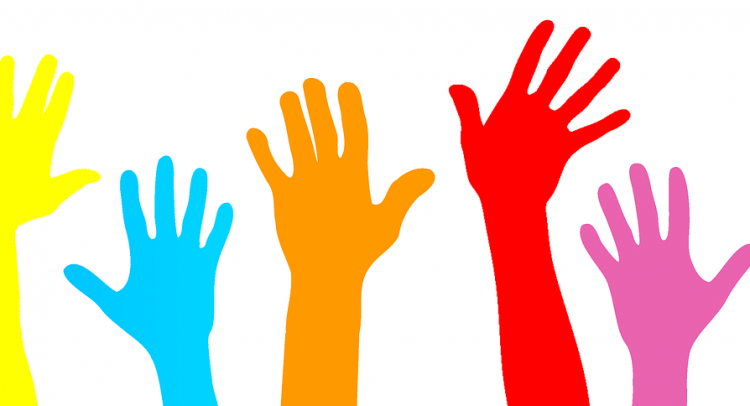 The changing landscape of volunteering

HOW VOLUNTEERING CAN HELP VOLUNTEERS.
By Ben Cooke

In the fall of 2011, the night before her first class on campus, Julie Sumerta tripped over a printer on the floor. She fell, hitting the side of her head against a wooden bed frame. Sumerta blames having too much on her mind between her four year old about to start junior kindergarten and her own schooling. Looking back, Sumerta still finds irony in the situation. “A printer brought me—a person who has deeply tied academics into my identity—down!”

Left cognitively and emotionally depleted by a traumatic brain injury, Sumerta put her academic plans on hold. At the time, she was pursuing a master’s of public administration, with plans to enter a PhD program the following year. Not only was she now coping with physical disability, she found her confidence had taken a dive. “I thought to myself, ‘What am I going to do now? What’s my next step in terms of what I want to do?’”

Unable to speak without a stutter, Sumerta spent two years recovering before she was finally able to get back on her feet. After being released from outpatient treatment in 2014, she spent the next two years working on art and design for her small business along with some travelling.

Nearly four and a half years after the accident, Sumerta decided it was time to involve herself in the community. In March 2016, she started volunteering at the Alzheimer Society in the hope that it would get her back on track. The interaction with others, she believed, could help restore her cognitive abilities as well as boost her confidence. She was right. Gradually, by connecting with people at the society, Sumerta found a sense of purpose and renewed self-assurance. Her speech also returned. And, she says, volunteering has also potentially paved the way to future employment.

Sumerta is not alone in her experience. One study from Volunteer Now shows that volunteering isn’t just good for those on the receiving end. It’s good for the volunteers; it supports their mental and physical health. The stimulation and structure involved in giving your time to others helps combat the effects of depression, loneliness and social isolation. The effects of volunteering go well beyond the individual however. According to The United Nations Volunteers, high levels of volunteering also exhibit high levels of trust, solidarity and reciprocity. But while volunteering can be a rewarding experience, the sector is in flux. The motivations of volunteers do not always match the needs of the organization they give their time to.

So, what does the volunteer sector look like? According to a 2013 Statistics Canada report, more than four out of 10 Canadians 15 and older volunteered in some capacity. That’s 500,000 fewer volunteers than there were in 2010, the date of the last report, despite the population of that age group increasing by a million. More shocking, however, is that only 10 per cent of volunteers account for 53 per cent of all volunteer hours at non-profit and charitable organizations.

Kari Astles, senior co-ordinator of volunteer engagement at Ontario’s Brant Community Healthcare System, says the shift can be clearly seen at Brantford General Hospital. The core group of volunteers at the hospital are getting older, says Astles, and there are fewer who can commit to working three to four days a week. New volunteers who come through the door are looking for less of a commitment and a way to satisfy their interests just as much as they are interested in serving a cause. “It’s not just one person we’re recruiting” when an older volunteer leaves, says Astles. To fill a spot, “we’re really recruiting three or four people.”

Volunteer managers across the board are finding it hard to adapt to this changing landscape. Not only do new recruits have less time to offer, they tend not to stick around as long. Astles thinks this is because they are not always satisfied with the sorts of routine tasks asked of them. “They’re looking for variety with what they do as volunteers.”

Kerri Emberlin, the team lead of volunteer engagement at Alzheimer Society of Brant, Haldimand Norfolk, Hamilton Halton, has watched these changes over the past 30 years and is keenly aware of the problems within the sector. Organizations need to adjust to the changing expectations among volunteers, she says. “When you’re losing lots of volunteers because they’re not feeling fulfilled and not feeling valued, that’s where you really need to look at your program and understand why individuals are leaving and make changes.”

Emberlin and her team have found more creative ways to keep volunteers interested, like providing leadership opportunities. “We have a retired professor in Hamilton who is now facilitating training in our community about dementia,” she says. “We’re utilizing those skills to help offset some of the needs in the organization because there are educators in all of our communities.”

Camara Chambers, executive director of Volunteer Toronto, says her organization helps 440,000 volunteers find positions a year. Of the people who attend their workshops, 80 per cent are there to find work. New immigrants want to get Canadian work experience, while others want to bolster their employment chances. Chambers agrees there is an increasing disconnect between what non-profits want and what volunteers are looking for. Finding a way to create better engagement is an important and timely task.

Tucked away in the basement of St. Andrew’s United Church, in Brantford, Ont., are the offices of a volunteer program that may point the way beyond some of the problems the sector is facing. Twelve-year-old students Jaiden Willson and Cavelle Sproulle, from Woodman Elementary School, are learning what it means to help in their community. “Kids our age should start to be doing something like this, so, then, when they’re older, they can help people,” says Willson. Sproulle agrees. “They don’t think about others as much,” she says, believing that children are very self-centered. “Volunteering here or anywhere else would be good” for kids. Along with about 20 other students from their Grade 6/7 class, and with the guidance of their teacher, Tom Zelazny, the pair have been volunteering at the church’s Soup for the Soul program.

“The earlier the better,” says Zelazny. The hope is that by volunteering at a younger age, before they start high school, and it gets too hard to reach them, the kids will learn more about compassion and consistency. In the soup kitchen, Willson and Sproulle meet people disconnected from society, homeless, less fortunate and those who deal with addiction and mental illness. Zelazny believes that the social interaction between the students and the isolated clients has been an eye-opener. By their continued effort to help others, the girls can gain a greater sense of self-worth, he says.

Volunteering will pay off for Sproulle and Willson as it certainly has for Sumerta. After nearly two years working with Alzheimer patients, she has regained her confidence and grown as an individual, she says. Sumerta is now on track to complete her bachelor of social work at the University of Waterloo and hopes to enter the workforce after she graduates. Giving to others was indeed a way to give to herself.