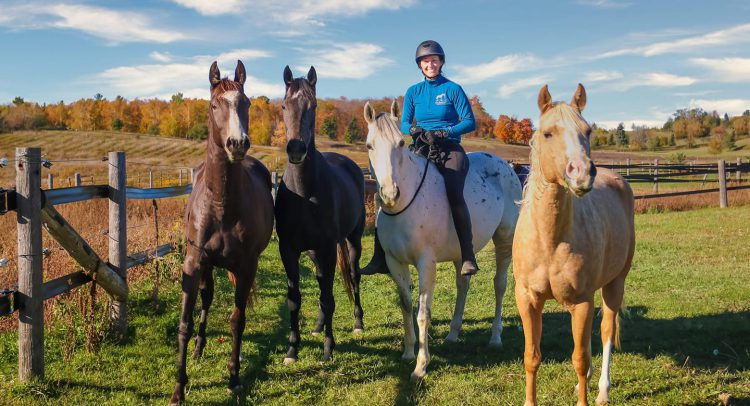 A passion for horses

LINDSEY PARTRIDGE’S KNOWLEDGE, PASSION AND AMBITION MAKE HER THE HORSEWOMAN SHE IS.

It was three o’clock on a warm July morning in 2019 when eight-months pregnant Lindsey Partridge and her 17-year-old protégé, Franny Galvin-Hynes, climbed into her 2003 silver Dodge Ram 3500. Sporting a grey t-shirt with Baby on Board spread across her chest and belly and Galvin-Hynes behind the wheel, the pair set out for their 20-hour round trip from Pontypool, Ont., to Pennsylvania.

They were picking up three Mustangs for the 2019 Mustang Makeover, a series of competitions across the United States in which participants are assigned a feral Mustang and challenged to train and domesticate it in 100 days. As Galvin-Hynes drove, Partridge worked on her laptop on blog posts or YouTube videos. Trips like these aren’t uncommon for the two but Partridge’s constant need for a bathroom break was unusual. “I just thought that I was peeing myself. Like, man, I’m having a really hard time holding my bladder,” Partridge remembers with a laugh.

With slight cramping that Partridge chalked up to Braxton Hicks contractions, they picked up their Mustangs — two for Partridge and one for Galvin-Hynes — and began their trip back to Canada. As dusk and home drew near, Partridge suggested they stop for the night but Galvin-Hynes insisted she could drive the last six hours. They arrived home in the dark, got their Mustangs settled and Partridge headed to bed before work in the morning as a public health nurse.

Partridge has such a passion for horses that she will do anything she sets her mind to. Her willingness to learn and try new things, her patience, and her ambition are all traits that make her the talented horsewoman she is. At the age of eight, Partridge followed her older sister to a March Break horseback riding camp and was hooked. She started at a traditional Quarter Horse barn (a breed popular with cowboys and known for running the fastest quarter-mile), where riders were pretty rough and borderline abusive to some of their horses. Partridge says riders would use harsh bits (a piece of metal placed in a horse’s mouth and used for control) to crank their horse’s face down or tie their heads to their chest to make them carry their head low.

It wasn’t until one lesson when Partridge was about 15, when her horse refused to jump a set of barrels and laid on its side, that she began to fall out of love with riding. Her coach told her to smack the horse with the crop, but Partridge couldn’t bring herself to do it. Scared and crying, Partridge half-heartedly smacked her horse, but it still wouldn’t jumping. After that, she gave up riding. “And that was a real turning point for me,” she says. “I realized I wanted to learn a different way. Like, of course, there’s got to be a different way out there other than to just smack my horse.”

Once she turned 16, Partridge started riding and schooling horses for others and soon began working at a facility that taught natural horsemanship, which “basically means trying to use behaviours that come naturally for the horse,” Partridge explains. An example of natural horsemanship is pressure and release training, when a rider applies pressure to a particular area on the horse to encourage a movement or behaviour, and as soon as the horse moves into that position, the pressure is released as a reward. Once again, Partridge was hooked.

One of the traits that makes Partridge such a dedicated horsewoman is her desire to learn. Galvin-Hynes, 19, started working with Partridge when she was 12. She now owns 10 of her own horses, all thanks to Partridge. As Partridge’s protégé, one of the things that Galvin-Hynes admires most about her mentor is her willingness to try new things. “Most people, they’ll learn something or get up to a certain level and they’ll go, ‘That’s good enough,’” says Galvin-Hynes. “Lindsey [however] is always learning and getting information from new people. She’ll never go into things saying, ‘I don’t want to learn that.’”

Annette Forkun, Partridge’s mother, says even from a young age, Partridge was always trying to learn and improve, even when it came to falling off her horse. Once at a competition, Forkun was filming her daughter’s ride, “but then, when she started to fall, I stopped filming. And then, afterward Lindsey said, ‘Why did you stop filming? I wanted to see how I fell.’” For many riders, having videos of your fall helps you learn what went wrong and what not to do next time, and Partridge is no different.

With all the learning that Partridge does, one of the skills she needed to use the most is patience. Galvin-Hynes says Partridge’s patience is unmatched and that she could out-wait a tree. She says if Partridge is training a horse with a new liberty command, like to lie down, she “will literally stand there for hours, just so the horse can do it correctly.” Her patience comes in handy most when training for the Mustang Makeover. While training a wild horse in 100 days is a challenge for anyone, it can be more so for Canadians who choose to compete. Mustangs are native to the United States and the government has strict laws to protect them. Canadians can only get Mustangs and be eligible to compete in the challenge if a Mustang has gone to auction three times and been rejected every time. The rationale behind this, Partridge says, is because of the slaughter industry in Canada, which does not exist in the U.S. (after a 2005 bill, which led to the closure of all horse slaughterhouses). The government has concerns that their horses will just be brought to Canada to be killed.

“It’s funny because when I compete in the Mustang challenge, sometimes people will comment on my videos and say, ‘Oh, well, you clearly got the easy Mustang.’ I’m, like no, I’m just a good trainer because Americans actually had to turn this horse down three times for me to get it.” Despite getting Mustangs that Americans didn’t want, in 2019, Partridge won reserve champion — second overall — and legends champion at the Mustang training challenge at the Midwest Horse Fair in Wisconsin and reserve champion for the Extreme Cowboy Association Mustang class.

In addition to her patience, another skill that Partridge possesses is ambition. “Other people see things as an obstacle, as a problem. And she always finds a way around it and that she can do what she feels she wants to,” says Forkun. In 2016, Partridge was in New York City promoting a movie, Unbridled, that she and her horse Dreamer were in. While downtown, “Lindsey said, Well, I’m going to walk through New York City with my horse,’” says Forkun. “And I was like, why? Do you realize how busy it is? And sure enough, she did it.” From Battery Park and the Statue of Liberty, past the Freedom Tower, Rockefeller Center, Central Park and through Times Square, Partridge walked side by side with Dreamer. With just a simple rope around his neck, they walked through crowds and scaffolding, beside honking cars and even made friends with some NYPD officers. Forkun says once Partridge had set her mind on the adventure and made sure it wasn’t illegal, nothing would stop her.

After the long trip to Pennsylvania, Partridge rose the next morning and headed to work as a public health nurse. As her shift went on, and the peeing, cramping and exhaustion grew, Partridge’s co-workers encouraged her to head to the hospital for fear she was in labour. “I didn’t want to be one of those people that goes to the hospital and is like, ‘I’m in labour’ and they’re, like, ‘No, you’re not even close,’” and they send you home Partridge says. Her colleagues convinced her, so she finished her shift and went straight to the hospital. Almost immediately upon arrival, Partridge was told that she had been in labour for the past 24 hours and that her baby was coming soon. Hours later, her daughter was born with a blood sugar below zero, which can have a serious impact on infant growth and development, and Partridge was rushed into emergency surgery because of a retained placenta.

However, a week later, after both Partridge and her daughter had been kept in the hospital for observation, she was immediately back in the pen training her Mustang, and a week after that, she competed in a jumper competition with her off-track thoroughbred. Partridge says she isn’t sure where her passion comes from — to her, she simply has the horse bug. “It just brings you to the present. And you don’t think about anything else. It doesn’t matter if I’m trail riding or I’m working liberty or whatever, I just enjoy every moment with the horses…. It doesn’t even feel like work when I’m doing stuff out there.”

Student entrepreneurs make the most of the pandemic