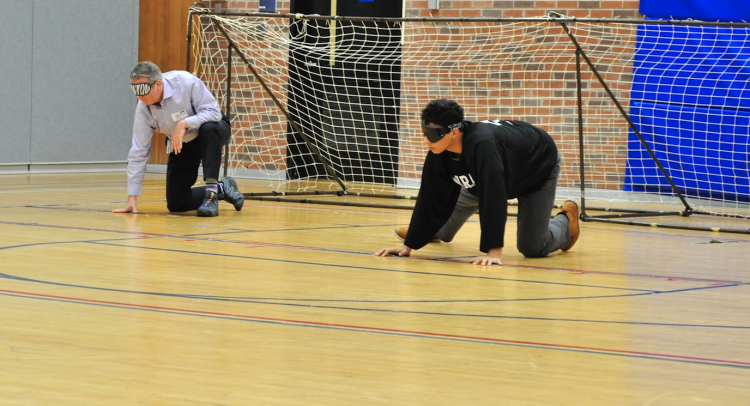 The value of blind education

Nathan takes a knee, fingers resting on the floor. He clenches his teeth as sweat trickles down his forehead and into his cloudy eyes. He holds his head slightly to the left, listening for the slightest rustle from the players opposite as spectators on his right hold their breath. One of his opponents grabs the 2.8-pound, black ball and launches it across the court, toward Nathan, the bell inside it ringing out. Nathan leaps forward and throws himself on the floor like a human shield, his arms stretched wide. But the ball rolls diagonally, away from his hands and toward his feet. Nathan hears the movement and reacts instantly, shoving his body backward and managing to catch the ball between his calves. The audience goes wild, cheering his name.

Nathan is the star player of the game. But his athletes prowess doesn’t end there—he’s also an excellent wrestler, he won a gold medal at the provincial cross-country track meet and is a member of a national cycling team. Like all top athletes, he has talent, dedication and skill. What he doesn’t have is vision. Nathan started losing his sight a decade ago until it gradually deteriorated completely. But that doesn’t stop him from pursuing his passion for with the same drive as a sighted athlete, as seen in the goal ball game that W. Ross Macdonald School for the Blind hosts with the Canadian National Institute for the Blind in Brantford, Ont. His ability to excel at sports may surprise some people, who assume that those with vision impairments are consigned to a life of inactivity, socially isolated and disconnected from the world around them. But nothing could be further from the truth. Young people with vision loss are curious, passionate and not afraid to try new things and explore. The biggest barrier they face is being dismissed by sighted people who rely on negative misconceptions about them.

There are around 5,000 elementary and high schools in Ontario and fewer than 2,500 students who have visual impairments. As such, most of them go to traditional schools instead of W. Ross. Although the governments says provides inclusive education at all its schools, in practice, that isn’t the case. According to Maggie Baston, who has spent the past seven years working as a resource teacher, travelling across the province to conduct assessments on students with vision impairments, such students are likely to be excluded in traditional school settings. For example, she says students with visual impairments need bigger desks for their printers and braille boxes. As a result, their desks are most likely off to the side of the classroom. When they want to socialize with their peers, they have to get up from their desks to find one. To make it even more difficult, most students sit in groups, further isolating the students who are blind and sitting by themselves. As a result, blind students in traditional schools tend to have lots of adult interaction but little peer-to-peer interactions.

In addition, students with visual impairments are not allowed to take part in phys ed class. “In a sighted school, they will take them out of the gym because they are not sure how to keep that student safe in an environment where balls may be flying around and there is a lot of movements,” says Ed Zinger, gym teacher at W. Ross. That’s a shame, as research shows that taking part in group games and sports helps students with vision impairments build supportive relationships as well as and self-confidence and the feeling of power and control.

Misconception about what people with vision impairment can do continue long after elementary school. According to Statistics Canada, about 36 per cent of people with visual impairments aged 15 to 64 said they were not working in 2006, the latest year for which data is available. The CNIB says the situation is far worse. According to its research, as many as 60 per cent of people who are blind can’t find full-time work. But the number may vary as the search in progress. That has less to do with their abilities than it does with people’s misconceptions, says Eric Bourgeois, 32 year old male who was born blind. “They don’t know how to put up with us,” he says. Although he has a diploma from Mohawk College, in Hamilton, Bourgeois has been unable to find full-time work in his field and so has volunteered for the CNIB for the past three years. John Rafferty, president and CEO of CNIB, says the high unemployment rates for people with vision impairments is ridiculous. “People just ignorant,” he says. “W. Ross and CNIB are the symbol of what’t broken in society,” he says. “If all the education system catered to everyone equally, then you wouldn’t need to have separate model.”

It’s just after 4 p.m. when I finish my interview with Bourgeois and his friend Seana Trigiani at a public library in downtown Hamilton. They’ve given me so much to think about in terms of the challenges that people with vision impairments face and the misconceptions I didn’t even realize I held about them. They suggest we grab dinner, and a knot grows in my stomach when they say they’re craving sushi. I’m not at all familiar with the city and am nervous about navigating the strange streets in search of a restaurant with two blind people clinging to my sides. “Nicole, you think you can follow us?” asks Bourgeois. “It’s just down the street around the corner. It’s the best sushi bar in Hamilton,” he says, unfolding his cane and walking out the library’s front door. He and Trigiani laugh and talk about how many sushi rolls they should get as they walk briskly through the crowd, waiting for the traffic signals at the intersection, as I race to catch up.

Retirement: Have a healthy and happy one

Fear not: Binge-watching isn't as bad as you think